In the Northern Tradition, the Wyrd is the product of the three Norns who weave this web of fate or destiny which is under the control of Orlog, the omnipotent, omnipresent and eternal law of the universe to which we all are bound. However, I’ve found that shamanically, one can work with the three Norns to bring about outcomes that serve the highest good of all, and particularly during times of eclipses, such as the one we just had.

So how do we talk to the Norns? How do we petition the fates? Well, it makes sense to me to use the language of the Northern Tradition as it comes from those who created the myths about the Norns, the World Tree and the Wyrd, and by that language, I mean using the 24 runes of the Elder Futhark for divination. So on the morning of the eclipse, I threw the runes and was presented with six  of them, in three pairs, as shown below. 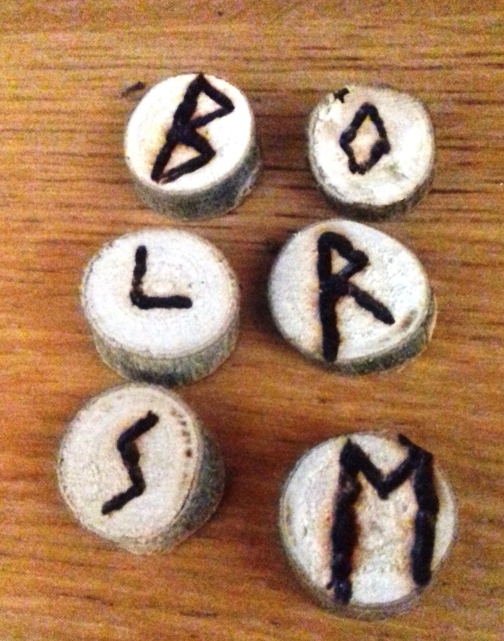 I won’t say what I asked for, because as I always say, “magic shared is magic halved.” But anyone who knows me can make an educated guess, and also if you are familiar with the runes, it won’t have escaped your notice that there is a strong presence of the Earth Mother, Nerthus, and the god of Sovereignty, Ing, not to mention horses, which are a symbol of Sovereignty.

The bottom row shows Sigel, or the Wheel of the Sun and it represents the tremendous power of the Sun and the clear attainment of goals. Ehwaz is next and it means ‘horse’. It represents a journey that signifies the destiny that the Wyrd of our life has set for us. Ehwaz is ruled by Earth and the fertility goddess Freyja, the sister of Frey who, as Ing, rules Sovereignty.

The middle row shows Lagu, ruled by Nerthus the Earth mother. It represents water and fluidity and is the medium by which passage may be gained but not without risk – as they knew on The Titanic! The second rune in the middle row is Rad, which symbolises riding –  both on horseback and by sexual intercourse – and it represents the transference of energies, from one place to another. Rad is also ruled by Nerthus the Earth Mother, and Freya’s brother, Frey, in his Sovereignty aspect of Ing.

The top row shows firstly female deity Beorc, which is governed by Earth and echoes  the shape of the breasts of the Earth mother Nerthus. It represents purity and purification and signifies new beginnings on a higher organic level. And finally, there’s the rune for Ing, the ithyphallic (to me) aspect of Frey which governs Sovereignty and who is the consort of the Earth mother, Nerthus.

I told my spirits what I was going to do, and it was as follows. I devised a picture for each row, showing a sort of moving tableau of what I felt each pair meant to me. Then I visualised the picture of the bottom row during the first half hour before the eclipse, the second picture during the eclipse itself, and the third picture in the half hour after the eclipse.

Halfway through that process, I did slip into an actual shamanic journey in which lots of Wyrd stuff happened. I won’t go into the details of that here, though. I wrote this merely to show a way to work with runes shamanically.  I hope it helps.