In order to interpret the metaphors contained in ancient myths, one has to first of all understand that they were meant to act as mnemonics, and so they were based on characters that our ancestors drew in the stars over their heads.  In this way, these nomadic nocturnal wanderers and seafarers could carry their memory guide with them; they only had to look up and it was there.

This is no less true of the stories of the Celts, the Anglo-Saxons and the Norse – loosely known as the Northern Tradition. However, the stars of the Northern Tradition are not the same as those that were valued by the Greeks or the Egyptians astrologers, who created classic Western astrology. Therefore, to correctly interpret the stories of our ancestors in the northern hemisphere, we must know which stars were important to them.

There were fifteen key stars that were used in the astrology/astronomy of our Scandinavian and European ancestors and these were the same fifteen stars that were used for navigation in that part of the world. No wonder then that the Vikings were such good seafarers; they knew and could read the skies above them easily by just remembering their stories. Better than Sat Nav!

In Nigel Pennick’s excellent book, Runic Astrology: Starcraft and Timekeeping in the Northern Tradition, he gives twenty of them. (I’ve photographed this so that you can follow the key.) 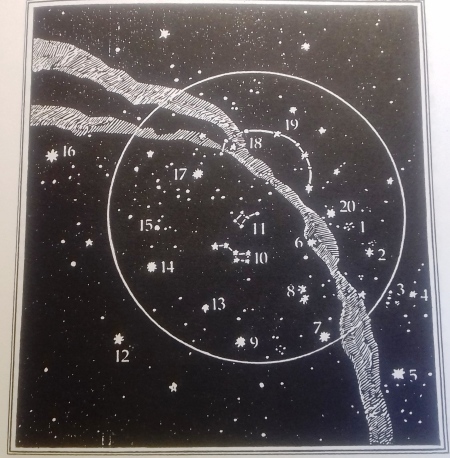 So what’s all this got to do with King Arthur and Camelot?

Well, we can find the source of King Arthur and Camelot by comparing the Celtic and Norse astrology/astronomy and finding the correspondences.

For instance, the Norse called Polaris, our current Pole Star, the Nowl (Navel) –  although it wasn’t the Pole Star of their time, due to the precession of equinoxes. The Pole Star at the beginning of the Common Era was known to the Norse as the Lode Star, which is at 32 Camelopardali, also known as 4339 Camelopardali.

The Lode Star or Camelopardali is key to the oldest King Arthur myth, and is almost certainly from where the French poet Chrétien de Troyes took the name for the first known mention of Camelot in his 12th century poem “Lancelot, the Knight of the Cart”.

The earliest zodiac heroes did not traverse the wheel of sun signs but of the rotating pole stars. We read about King Arthur’s journey around the celestial pole in the 6th century poem Preiddeu Annwyfn by Taliesin, and it’s rather like a similar heroic journey of Horus that’s recounted in the Egyptian Coming Forth Into Day texts.

I praise the Mighty One, Pendragon of the kingly land,

Who encompasses the margins of the world!

According to the tale of Pwyll and Pryderi.

None before him was sent into it,

Into the heavy blue chain which bound the youth.

From before the reeving of Annwfn he has groaned,

Until the ending of the world this prayer of poets:

Except seven, none returned from Caer Sidi.

Is not my song worthily to be heard

I draw my knowledge from the famous cauldron

The breath of nine maidens keeps it boiling.

Is not the Head of Annwyn’s cauldron so shaped;

Ridged with enamel, rimmed with pearl?

It will not boil the cowardly traitor’s portion.

The sword of Lleawc flashed before it

And in the hand of Lleminawc was it wielded.

Before hell’s gate the lights were lifted

When with Arthur we went to the harrowing.

Except seven, none returned from Caer Feddwit.

Is not my song fit recital for kings

In the four-square Caer, in the Island of the Strong Door,

Where noon and night make half-light,

Where bright wine is brought before the host?

Except seven, none returned from Caer Rigor.

I sing not for those exiled for tradition

Who beyond Caer Wydyr saw not Arthur’s valour.

Six thousand men there stood upon the wall;

Hard it was to parley with their sentinel.

Three ship burdens of Prydwen we went with Arthur:

Except seven, none returned from Caer Goludd.

I sing not for those whose shield arms droop,

Who not day nor hour nor causation

Nor when the glorious Son of Light is born,

Nor who prevents his journey to Dol Defwy.

They know not whose brindled, harnessed ox

With seven score links upon his collar.

When we went with Arthur on difficult errand;

Except seven, none returned from Caer Fandwy.

I sing not for those not of our companions,

Who know on what day the chief was born,

Who do not know the hour of his kingship,

Nor of the silver-headed beast they guard for him.

When we went with Arthur of mournful mien:

Except seven, none returned from Caer Ochren.

The significance of the number seven recurring so many times in Preiddeu Annwfn, and in most other sacred texts of the time, is likely to be a reference to the seven stations of the celestial pole.  According to my understanding, they are found, metaphorically, in the oldest Arthurian tale (dated 1090 CE)  Culhwch and Olwen, as follows:

Camelopardalis is to the south of the She Bear (Ursa Minor). 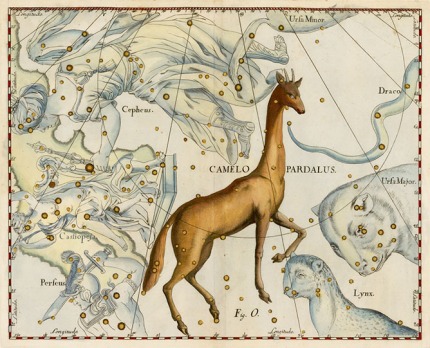 “Camel’ means ‘long necked camel’ and “pardalis’ means ‘leopard’ and this is probably why the Norman poets and scribes created the story of the castle of Camelot being bequeathed to Guinevere and Arthur on their wedding day by her father, the “leopard” Leondegrance.

There is no mention of Camelot in the oldest Arthurian myth, Culhwch and Olwen – only a castle where Arthur, Culhwch’s cousin lives. Neither are there twelve knights or a round table, which are first mentioned in the 12th century Roman de Brut, a verse literary “history” of Britain written, in the Norman language,  by the poet Wace.  Wace based his poem on Geoffrey of Monmouth’s The History of the Kings of Britain. However, all scholars are more or less in universal agreement now that this so-called ‘history’ was in fact based on mythological texts. 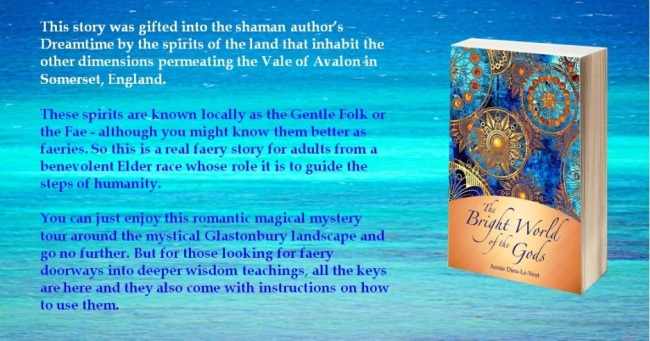