I’m reminded so often in these difficult days of crazy-makers running amuck on the world stage of the battle at the heart of the Bhagavad Gita. If you haven’t read it, I seriously recommend it …because this Indian Vedic classic still retains the understanding of the importance of breaking through the duality of war and peace which has been lost in Jesus’s turning-of-the-other-cheek type. This is what our enemy does – mixes up the spiritual and the material, the metaphorical with the literal, and it fools the non-initiates every time. In the mind programming weapons of mass distraction which have been assailing us for hundreds of years, the deep spiritual peace ‘that passeth all understanding’ is presented, by Church and State, to mean that God says peace is better than war… and we’re told to repeat this like parrots even while they are waging all out war on us, as they are today.

However, this Vedic myth gives us an example of a god persuading a human being of the wisdom of going to war. As the Bhagavad Gita‘s warrior Arjuna stands on the eve of battle and surveys the thousands ranged against his side, and some of them relatives, he falters through fear and doesn’t want to take up arms. It’s only through the wisdom teaching of his charioteer, who is actually Lord Krishna, that he begins to understand that peace is not the absence of war … war is what must sometimes be faced if we are to be left in peace in our lives, and it is an initiatory rite of passage.

I’m not saying that makes war right; I’m saying it’s sometimes unavoidable. Right now, we are at war, even though those that have declared war on us didn’t bother to let us know. If we win and survive, peace will come afterwards for succeeding generations…until this challenge comes around again, as it will surely will. 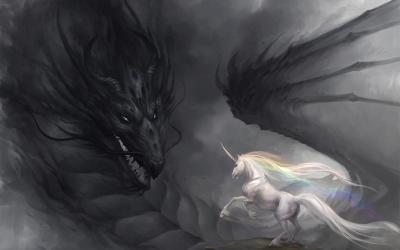 The whole of the Bhagavad Gita is about the testing of the adept Arjuna (meaning ‘silver’) before being ‘put into the fire’, like a sword. It’s a fire initiation, similar to that experienced by Saul/Paul on the way to Tarsus, and the apostles in the Upper Room.

At the Mystery initiations which were held during the late Neolithic, as I wrote in The Sacred Sex Rites of Ishtar, the fire initiation came after the water initiation. It is what John the Baptist meant at the River Jordan when he is made to say in Luke 3.16: “I baptise you with water. But one who is more powerful than I will come, the straps of whose sandals I am not worthy to untie. He will baptise you with the Holy Spirit and fire.”

So did Pandu’s Son behold
All this universe enfold
All its huge diversity
Into one vast shape, and be
Visible, and viewed, and blended
In one Body- subtle, splendid,
Nameless- th’ All-comprehending
God of Gods, the Never-Ending
Deity!

But, sore amazed,
Thrilled, o’erfilled, dazzled, and dazed,
Arjuna knelt; and bowed his head,
And clasped his palms; and cried, and said:
Arjuna. Yea! I have seen! I see!
Lord! all is wrapped in Thee!
The gods are in Thy glorious frame! the creatures
Of earth, and heaven, and hell
In Thy Divine form dwell,
And in Thy countenance shine all the features

Of Brahma, sitting lone
Upon His lotus-throne;
Of saints and sages, and the serpent races
Ananta, Vasuki;
Yea! mightiest Lord! I see
Thy thousand thousand arms and breasts, and faces,

And eyes,- on every side
Perfect, diversified;
And nowhere end of Thee, nowhere beginning,
Nowhere a centre! Shifts-
Wherever soul’s gaze lifts-
Thy central Self, all-wielding, and all-winning!

Darkness to dazzling day,
Look I whichever way;
Ah, Lord! I worship Thee, the Undivided,
The Uttermost of thought,
The Treasure-Palace wrought
To hold the wealth of the worlds; the Shield provided

To shelter Virtue’s laws;
The Fount whence Life’s stream draws
All waters of all rivers of all being:
The One Unborn, Unending:
Unchanging and Unblending!
With might and majesty, past thought, past seeing!

Silver of moon and gold
Of sun are glories rolled
From Thy great eyes; Thy visage, beaming tender
Throughout the stars and skies,
Doth to warm life surprise
Thy Universe. The worlds are filled with wonder

Of Thy perfections! Space
Star-sprinkled, and void place
From pole to pole of the Blue, from bound to bound,
Hath Thee in every spot,
Thee, Thee!- Where Thou art not,
O Holy, Marvellous Form! is nowhere found!

O Mystic, Awful One!
At sight of Thee, made known,
The Three Worlds quake; the lower gods draw nigh Thee;
They fold their palms, and bow
Body, and breast, and brow,
And, whispering worship, laud and magnify Thee!

Rishis and Siddhas cry
“Hail! Highest Majesty!
From sage and singer breaks the hymn of glory
In dulcet harmony,
Sounding the praise of Thee;
While countless companies take up the story,

These see Thee, and revere
In sudden-stricken fear;
Yea! the Worlds,- seeing Thee with form stupendous,
With faces manifold,
With eyes which all behold,
Unnumbered eyes, vast arms, members tremendous,

Flanks, lit with sun and star,
Feet planted near and far,
Tushes of terror, mouths wrathful and tender;-
The Three wide Worlds before Thee
Adore, as I adore Thee,
Quake, as I quake, to witness so much splendour!

I mark Thee strike the skies
With front, in wondrous wise
Huge, rainbow-painted, glittering; and thy mouth
Opened, and orbs which see
All things, whatever be
In all Thy worlds, east, west, and north and south.

O Eyes of God! O Head!
My strength of soul is fled,
Gone is heart’s force, rebuked is mind’s desire!
When I behold Thee so,
With awful brows a-glow,
With burning glance, and lips lighted by fire

Fierce as those flames which shall
Consume, at close of all,
Earth, Heaven! Ah me! I see no Earth and Heaven!
Thee, Lord of Lords! I see,
Thee only- only Thee!
Now let Thy mercy unto me be given,

Thou Refuge of the World!
Lo! to the cavern hurled
Of Thy wide-opened throat, and lips white-tushed,
I see our noblest ones,
Great Dhritarashtra’s sons,
Bhishma, Drona, and Karna, caught and crushed!

The Kings and Chiefs drawn in,
That gaping gorge within;
The best of both these armies torn and riven!
Between Thy jaws they lie
Mangled full bloodily,
Ground into dust and death! Like streams down-driven

With helpless haste, which go
In headlong furious flow
Straight to the gulfing deeps of th’ unfilled ocean,
So to that flaming cave
Those heroes great and brave
Pour, in unending streams, with helpless motion!

Like moths which in the night
Flutter towards a light,
Drawn to their fiery doom, flying and dying,
So to their death still throng,
Blind, dazzled, borne along
Ceaselessly, all those multitudes, wild flying!

Thou, that hast fashioned men,
Devourest them again,
One with another, great and small, alike!
The creatures whom Thou mak’st,
With flaming jaws Thou tak’st,
Lapping them up! Lord God! Thy terrors strike

From end to end of earth,
Filling life full, from birth
To death, with deadly, burning, lurid dread!
Ah, Vishnu! make me know
Why is Thy visage so?
Who art Thou, feasting thus upon Thy dead?

Bhagavad Gita, Chapter X1, Of the Manifesting of the One and Manifold

If that’s not a fire initiation, I don’t know what is. Actually, I do know. From where I’m sitting, it looks like much of humanity is about to go through this fire initiation…and only those with access to wisdom teachings and deep inner knowing will stand any chance of surviving. Ironically, to the true intiates, remaining in this world rather than going on to the next will not be as important to them as fighting to help Restore the Dharma in this Garden of Good and Evil for successive generations. For those who’ve tasted the beauty and bliss of the Other Worlds, where they get guidance from the interdimensional spirits, there is no belief in ‘death’ as a state of non-being, because ‘death’ is just a portal or gateway to another life. Lucan, the Roman poet, wrote this of the Druids in the first century CE:

“You, ye Druids… you who dwell in the deep woods in sequestered groves: your teaching is that the shades of the dead do not make their way to the silent abode of Erebus or to the lightless realm of Dis below, but that the same soul animates the limbs in another sphere. If you sing of certainties, death is the centre of continuous life. Truly the people on whom the Pole Star shines are happy in their error, for they are not harassed by the greatest of terrors, the fear of death. This gives the warrior his eagerness to rush upon the steel, a spirit ready to face death, and an indifference to a life which will return.”

He may have been influenced by Julius Caesar, who about 150 years earlier had written in his Conquest of Gaul… “A lesson which they (the Druids) take particular pains to inculcate is that the soul does not perish, but after death passes from one body to another; they think that this is the best incentive to bravery, because it teaches men to disregard the terrors of death. They also hold long discussions about the heavenly bodies and their movements, the size of the universe and of earth, the physical constitution of the world, and the power and properties of the gods; and they instruct the young men in all these subjects.”

The purpose of living on Earth is not to live in peace. The peacetime is there for us to prepare ourselves for the inevitable challenge that will come in this School of Hard Knocks. Many of us are not currently prepared – our adversaries have seen to that. And so we have to quickly catch up…

This rite of passage is not about staying alive… if it was, we would feel moved to sacrifice others for our safety. This rite of passage is about the survival of the fittest, but that doesn’t mean those who go to the gym a lot! The fittest are those with the courage and perception to be able to look truth in the eye and hold fast to their integrity and self-belief, even when the whole world is telling them that they’re wrong. They are able to do this because they receive interdimensional guidance and wisdom from the spirits of the Other Worlds; their battle wagons are driven through the Killing Fields by their chariot drivers, their Krishnas. 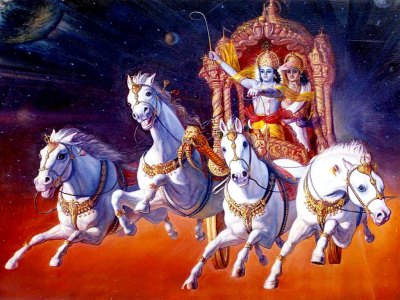 The peace will come afterwards – when we lay down a sustainable peacetime framework for our grandchildren and their grandchildren coming after, to help them prepare for their challenges, just as our early ancestors did.