Amid concerns about a possible false flag attack on the Olympic stadium, it might be reassuring  to know that the Olympic Park ~ as well as the whole of the Greater London area ~ is protected by a pair of nine-mile-high giant spirits who are quite visible to the naked eye, if you know where to look.

The Olympics Games are being held on the festival of the god Lugh/Lug/Lud, whose visage can be seen engraved into landscape, guarding the east of London. There is also an enormous unicorn that is plainly visible, guarding London to the west ~ just as the lion and the unicorn appear in the Coat of Arms for Great Britain.

The landscape giants of the lion and the unicorn are part of the Enchantment of London and the Earthstars Matrix, which appears to have been put into place long before even the Templars came into these lands, in the days of the Druids.

The Lion and the Unicorn

The Olympics is always held on the same dates, beginning  27th July, and it coincides with the time that the ancient Celts (and Gauls) would call Lughnasadh ~ the festival at which they honoured their sun god, Lugh/Lug/Lud. Lud is the British equivalent of the Greek Zeus or the Roman Jupiter.

Known as Lugh in Ireland, he was Lud in England of which the main capital city, before the Romans, was known as Caer Lud (Lud’s Town, now London). Around the eighth century BCE, the Britons built a temple to Arianrhod, Lud’s female counterpart, by the western city gate on a hill. They called it Luds Gate, but we now know it as Ludgate Hill.

The spring of his river, the river Lud/Lea, is actually within an earthwork enclosure known as Waulud’s Bank, which is a landmark along the St Michael ley line. It flows into the Lea Valley and then just before Temple Mills (formerly a Templar stronghold)  it loops round to surround the whole of the Olympic Park like a moat.

Lud is one of the guardians of the sacred city of London, the other being the unicorn, and both can be seen like huge landscape giants ~ Lud as the male kingly sun god lion (Lleu means ‘lion’ in Welsh) guarding London to the east, and the unicorn as the intuitive female moon goddess guarding the west.

It’s difficult to make out their bodies now that suburban Greater London has become so built up, but their heads and forelegs are quite distinct. On top of that, Lud the solar lion is wearing a crown, just as he appears in the coat of arms for Great Britain.

The unicorn to the west 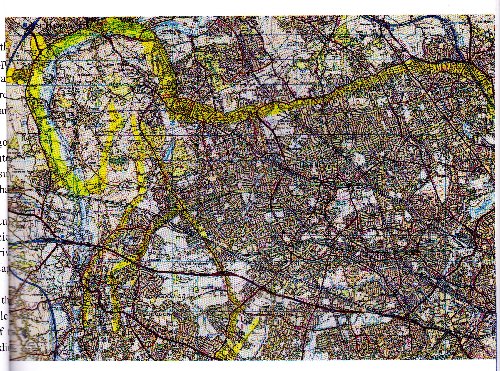 The lion to the east

The lion with crown 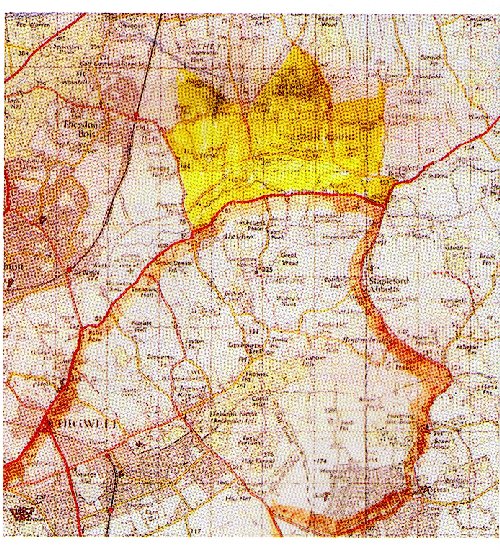 Chris Street has written about these landscape giants in the chapter entitled Guardians of the Sacred City in the book Legendary London and the Spirit of Place, edited by Anthony Thorley.

“The eye is in the area of Battles Hall and St Mary’s Stapleford. The lion’s mouth is in the area of Havering at Bower, and its chest is the A112 through Chadwell Heath. The paws rest comfortably in Dagenham, defined by parts of the A125 and A111.

“The kingly stature of the lion is emphasised by the surprising fact that some of the old paths, tracks and boundary lines above its head can actually be linked up in the shape of very regal crown, remarkably similar to the one on the real crest.”

There are lots of Red Lion pubs marking the silhouette of the lion, and the horn of the Unicorn is exactly at a place called Horn Hill.

The Earthstars Matrix of London

So is it just coincidence that images of a lion and a unicorn can be made out so clearly in the landscape around the London? According to Chris Street, no, because the images form a meaningful part of a remarkable discovery known as the London Earthstars Matrix.

This London Earthstars Matrix is also emblazoned on the London landscape but in a different way to the lion and the unicorn ~ yet all three are fundamentally connected.

The Earthstars of London refer to a ground-breaking piece of work in which it has been discovered that the sacred sites of London are not distributed at random. They connect in a vast and complex geometric pattern or matrix which includes many old but lesser known parish churches and sacred hills, as well as Westminster Abbey, St Paul’s Cathedral, Southwark Cathedral and the Tower of London.

“Two of the most important ley alignments in the capital pass through the Earthstars’ lion and unicorn ….

It is also known as the Coronation Leyline, because it is in direct alignment with three sites where the kings of Great Britain have been crowned.

“The Coronation line runs through the King’s Stone at Kingston-upon-Thames (where seven Saxon kings were crowned), and St Paul’s Cathedral and Westminster Abbey …

“The unicorn has an appropriate alignment of churches linked to the lunar divine feminine aspect. Most of its churches are dedicated to Mary, who is often depicted standing on a crescent moon, as the Christian version of the virgin moon goddess archetype.

“And at the heart of the unicorn is Harrow-on-the-Hill, where the St Mary the Virgin church is at the centre of an extraordinary pentragram of sacred leys and holy hills all radiating at a perfect 72 degrees.”

The five points of the Harrow-on-the-Hill star are Horsendon Hill, Barn Hill in Wembley, Belmont Hill in Stanmore, Dabb’s Hill in Ruislip and St John’s in Pinner.

Anthony Thorley says it’s evident from earlier drafts of his plans that he never got to use that Christopher Wren knew of the Earthstars Matrix when he was given the commission to rebuild the sacred sites of London after the Great Fire.

Anthony has devoted a whole chapter to this subject, Sir Christopher Wren‘s Secret London in his book Legendary London and the Spirit of Place.

In all, the Earthstars Matrix comprises nineteen designs ~ mostly pentagrams, hexagrams, circles and triangles.None of them are separate. Each connect to the whole. Chris Street says that it is a recognisable temple ground plan, but on a vast scale and covering more than 400 square miles of Greater London.

And this giant sacred but hidden temple is protected on both sides by the holy protector guardians of Great Britain, the lion and the unicorn, as shown on the royal coat of arms.

Legendary London and the Spirit of Place: New Light on the Great Changes of Our Times, edited by Anthony Thorley

The Alchemical Secrets of Glastonbury Tor