With the death of the murderous dictator Fidel Castro, and the fakestream media trying to push the idea that Putin has somehow infiltrated and rigged the US presidential election, it might be a good idea to revisit the Cuban Missile Crisis of 1962.

I want to revisit and reframe the story so that we can actually hear the facts, which were hidden from us at the time. If we face what really happened, the global elite will no longer be able to keep pressing on this nerve, to put us in fear of Russia and thus go along with their evil plans for World War 3, which they still haven’t given up on.

They can press on this nerve because for the Babyboomer generation, the Cuban Missile Crisis was as traumatic as 9/11 was later to be. For thirteen days in 1962, the DEFCON alert system went up to 2, which is the highest that it’s ever been, and thus this was the closest that the world has ever come to nuclear war.

Even without the internet, and 24/7 rolling news, everyone knew – or knew the official narrative, anyway, and we were very scared until we were finally informed that it had been resolved.

So what was it all about?

The story we were told was that naughty Communist President Nikita Khrushchev, president then of Russia, had put nuclear missiles on Cuba – just 90 miles from America’s shore.

In a TV address on October 22, 1962, Kennedy told the American people about the presence of the Russian nukes on Cuba, and explained his decision to enact a naval blockade around the island.

Kennedy also made it clear the U.S. was prepared to use military force if necessary, in order to neutralise this perceived threat to national security. But what he didn’t tell the American public was that Khrushchev had put the missiles on Cuba in response to Kennedy installing nuclear missiles in Turkey and aiming them at Russia.

Eventually both sides backed off, and the news was presented as a victory for Kennedy, who, we were told, had somehow managed to extract a promise from Khrushchev to remove his missiles in exchange for America not invading Cuba. The real reason, though, that Russia backed off was because Kennedy had secretly removed the US missiles from Turkey.

Nowadays, we’re much more sophisticated in interpreting the “news”, and we’ve learned to recognise false flags and fake news and propaganda. But we were extremely naïve then – some people didn’t even have televisions in the UK, which in any case, only came on in the evenings and it was all in black-and-white. Most of our “news” in the Sixties came from the radio and newspapers – and not one of them told us the real story. So this phenomenom of different fakestream media outlets all joining together and lying in unison from the same hymn-sheet, as they did throughout the recent US presidential election campaign, is nothing new.

I’m hearing that the recent reds-under-beds-scare, which Hillary-Soros and Co are trying to drum up to steal the election from President Trump, is not getting to Generation X and the Millennials. I would say that’s probably because they didn’t experience the initial trauma, at an early and vulnerable age, of the Cuban Missile Crisis. Added to that,  Russia has shown no expansionist tendencies during their lifetimes.

However, the psy-ops around the Cuban Missile Crisis has damaged the thinking, and therefore made it easier for others to manipulate the minds of the Babyboomers. We have lived our whole lives under the threat of nuclear war, like the sword of Damocles hanging over our heads, just so that détente will work. Some of us, in our student days, even had posters of the Cuban murdering psychopath “revolutionary” Che Guevera decorating the walls of our bedsits – was this a deliberate attempt to reinforce the trauma, I wonder? Why was he chosen to be such a hero when the truth was so very different?

Anyway, I hope that sacrifice will prove to have been worth it – but I’m really not sure. Rest in Peace, Fidel Castro – and may all our night terrors about Russia and nuclear war also rest in peace with your passing. Apparently, this is the scene in Little Havana right now where they are celebrating the death of the murderous dictator with the chants alternating between “Trump!” and “Cuba Libre!”. 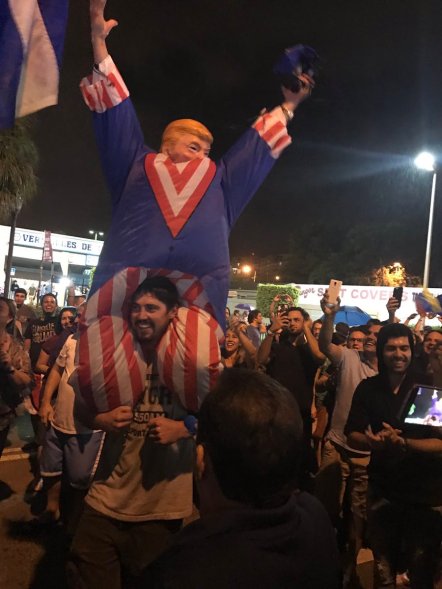 1 reply to The real truth about the Cuban Missile Crisis