Yesterday, I listened to a British television ‘reporter’ telling me, absolutely straight-faced and with a tone reflecting the deepest sincerity, that Donald Trump is considering resigning from the Presidential race through lack of support. It was so far from the truth that I burst out laughing. Trump’s message of Sovereignty is so resonating with the American public that he is filling huge stadia, the size of aircraft hangers, daily, with thousands more queuing round the block, unable to get in … 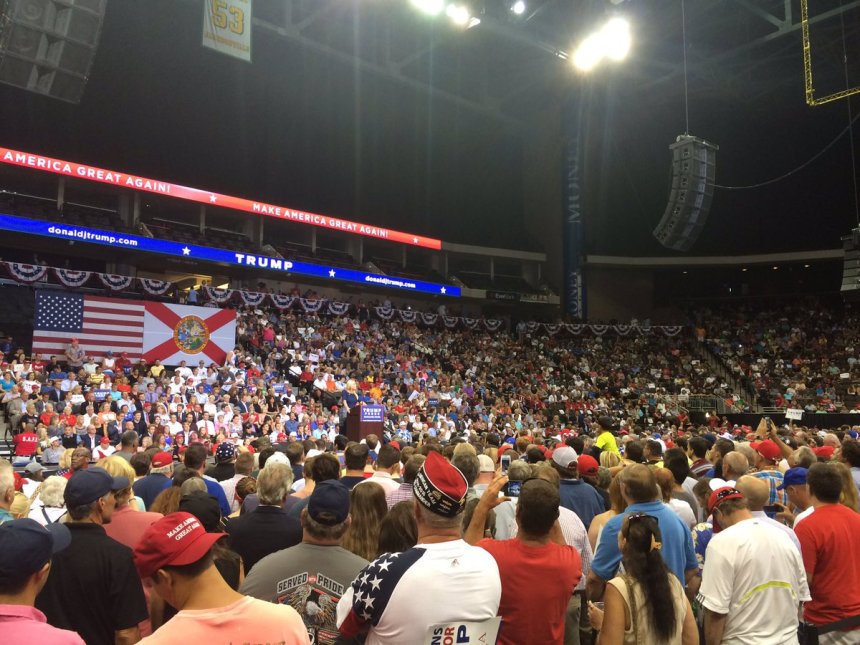 Hillary Clinton, on the other hand, can barely fill a town hall with her supporters and a good proportion of them have to be paid to attend – like the “seat fillers” who were rushed into the Philadelphia stadium during the Democratic Convention, last week, when more than a thousand Bernie supporters walked out in disgust at Hillary stealing his votes.

But this is just one example of the hundreds of lies that are now being told about Trump … or about the Islamic invasion of Europe, or any other inconvenient truths. These truths are inconvenient to the globalists’ agenda which sees Sovereigns, like us, as a threat. And they are right – Sovereignty is a threat to their extravagantly dissolute and corrupt way of life which so cruelly drives a huge gulf between the haves and the have-nots. That’s why a recent article from the Rothschild Economist urged its globalist-minded readers to pull out all the stops to staunch the “contagion” of  the Sovereigns’  world view, which it said, was “xenophobic”, “closed world”, and “anti-trade”,  thus demonstrating, in just those three short memes, how this kind of mind programming works. Easy-to-swallow dogma like that is ideal for those who are too busy to check out Trump’s policy positions themselves, or at least listen to one of his speeches – some of which are pure poetry.

Far from being “xenophobic”, “closed world” or “anti-trade”, Sovereigns, like Trump and Brexiteers, want to trade with and visit with everyone all round the globe. We just don’t accept that freedom of trade in goods and services has to go hand-in-glove with freedom of movement of peoples – especially when most of them want to come to the country with highest minimum wage! We want trade, but free trade, rather than the massive and unwieldly multi-country trade treaties, like TPP and TTIP, which lock us into undemocratic rule by corporations and big banks in a kind of two-tiered crony communism.

We don’t believe that our laws have to be written in another country’s unelected chamber, just because we trade with it; and we don’t have to share the same currency, or the same army either, with those we trade with.

What does it take to be a Sovereign?

Another lie being pushed by the marching-in-lock-step media is that anyone who wants Sovereignty is a far right, white supremacist nationalist. But we are not far right – it’s just looks like that from where they are standing. The barely-disguised Marxists of the mainstream media have moved so far to the left, we must appear to them like specks on the far right horizon! The term ‘white supremacist’ is just a way of smearing someone who doesn’t want to hand their country over to Third World migrants who have a completely different way of life, and will want to force that way of life on us.

Not everyone can be a Sovereign, because not everyone has the brain capacity and the courage to think independently. You do need more than a couple of brain cells to rub together, and access to the internet, so that you can read the actual documentation of what the globalists are proposing, rather than being satisfied by a pre-prepared digest from the BBC. It’s the difference between cooking your own delicious steak dinner, or just grabbing a McDonalds.

But you do also need courage to be a Sovereign, to face down your critics, because our society has become divided into two realities, or two worlds. There is now a huge gulf between those who slump in front of their tellies and just let the information wash over them, and those who pursue their own education on the internet. This is the difference between what’s known as ‘push media’ and ‘pull media’. And the numbers of those who prefer to pull up their own data on the internet are fast outstripping those who just lie there and let the mainstream media push any kind of story at them,  which is one reason why, for instance, Brexit won the EU referendum.

So now that the mainstream media has now gone full Soviet, surely this shows a sort of end-game scenario which they cannot lose – or they will be finished? An opponent is always much more dangerous when their back is up against the wall, and judging from recent articles such as that one in The Economist, and various Council on Foreign Relations discussions, the globalists are now going for it. They are actually at war with us.

The only way they can win their war is to lie … and lie and lie and lie. So many lies were told by the Remain camp during Brexit that you could built a ladder to the moon with them. The same now is happening with the American presidential race – totally fake stories in the papers about Trump, like being offered $150 million by the Koch Bros to drop out – and the polls being tampered with, to massively favour Hillary. It’s not just massaging the message; it’s naked fraud.

And so how can we see through those lies without being an expert political pundit? Well, there is a simple rule of thumb – because usually what the media accuses Trump of is not only untrue, but is much more true of Hillary. And as there are so many crimes that can be attributed to Hillary, these so-called journalists are not going to run out of material any time soon. So if you hear Trump being fitted up with a badly-cut, orange trouser suit, try it out on Hillary.

A classic is that Trump is a racist – which is based purely on his call for controlled migration into the United States. He is certainly not a racist, and in fact has a record of helping black Americans to get into corporate America through his partnership with Jesse Jackson. Hillary, on the other hand, refers to black people as “super predators” who need to be “brought to heel”; her closest mentor was one of the founders of the Ku Klux Klan, Robert C. Byrd, and she has been endorsed by the Grand Dragon of the California branch.

Another is that Trump disrespects women. A couple of months ago, the Washington Post ran a six-page spread of interviews with the girlfriends of Donald Trump, from when he was a single man-about-town. But despite such an investment in time, money and newsprint, the best they managed to come up with is that Trump once told a woman she looked beautiful in a bikini! Apparently, she felt “so humiliated”!

Trump in reality has many women in top positions throughout his many companies, and he was the first to hire a woman to supervise the building of a skyscraper – Trump Tower. But Hillary? There are countless women who were raped by Bill Clinton, who Hillary has threatened and intimidated to keep quiet about it. Then there are all the Arab countries that oppress women from which Hillary takes ‘donations’ for the Clinton Foundation, and not to mention supplying the rapists and murderers of women ISIS/Al Qaeda with Stinger missiles and Apache helicopters, which she personally profited from. It could be argued that Hillary Clinton founded ISIS.

Trump is anti-interventionist – he opposed the war on Iraq – and would like to slim-down Nato, to make it more fit for purpose. He intends, though, to go straight into the Middle East and take out the globalists’ proxy army of ISIS, which would do the rest of us a huge favour. On the other hand, Obama, who has caused more wars than any other US president in history, and won none of them, is sabre-rattling like mad at Russia through his unholy triumvirate of Victoria Nuland-George Soros-Angela Merkel, as we speak.

After reading all that, you might be amazed why any thinking person could ever vote for Hillary. Well, the truth is, they are desperate. The globalists put up more than 20 candidates for the American public to choose from – in both the Republican and Democrat camps. The problem for them is that the voters chose none of them, but the outsider – the anti-globalist Donald Trump.

The writer of the aforementioned Economist article recognises the problem, and finishes with the following:

“In America, where most is at stake, the answer must come from within the existing party structure. Republicans who are serious about resisting the anti-globalists should hold their noses and support Mrs Clinton… But the polls are worryingly close. The future of the liberal world order depends on whether she succeeds.”

So as you can see, Donald Trump now not only has to beat Hillary Clinton and her Democrat globalist machine, but he also has the whole of his own party, the Republicans, and the mainstream media, against him. It would be enough to make a weaker man resign, but I’ve got to understand something of the psychology of Mr Trump over recent months, and I’ve noticed that he seems to relish and and profit from adversity, which he approaches in a kind of Tai Chi way. In other words, he knows how to use his opponent’s force against them. So it will be interesting to see how he emerges from this, but I fully expect him to do so, and to come back more powerful too!