It was so heartening to see how the locals and even others, up and down country, pulled together in unison to help us overcome everything the Death Eaters threw at us, a year ago. There being no loyalty among thieves and dissemblers, it is the one thing they wouldn’t have bargained for.

Farmers further up country sent their feed down the M4 for the cattle affected, and there are now several ongoing and thriving locals projects to help the flood victims get back on their feet again. On top of that, there’s been enormous national pressure on the Environment Agency to allow dredging again which we can already see is having a marked effect.

What was a terrible disaster, at the time, has been turned into a shining example of what happens when the Evil Empire attacks. What these guys never build into their Gant charts, or their equations, is the loyalty, empathy and sympathy that ordinary folk feel for one another … and this is their Achilles Heel.

The rivers are full again and there is even more water flowing between their banks than at this time last year. The difference is now, they’re not overflowing their banks because of the dredging that has begun again.

Here are the smiling faces of just one local group making a difference, the aptly named FLAG (Flooding on the Levels Action Group).

This is Farmers Helping Farmers – now known as Forage Aid – getting ready to roll.

There was in fact a massive response from many companies within the agricultural industry, who donated their vehicles to the cause.

By 31st October 2014, the dredging of eight kilometres of the rivers Parrett and Tone near Burrow Mump had been completed. More still needs to be done but it has worked, because FLAG says that there is currently more water flowing down the Parrett and Tone than at this time last year, but the waters haven’t spilled over the banks. It was a joy to see that the sandbags were found useful only to the snowdrops – whose appearance every year is always such a harbinger of hope!

The flooding last year had been caused by a cynical tactic, in the late Nineties, by the Environment Agency to take over the dredging from those who’d always traditionally owned that responsibility  – the small farmers themselves – and then to fail to continue with the dredging because their own trumped up cost-benefit analysis made it too expensive to carry out.

It was a deliberate action to flood the Levels, based on a EU UN Agenda 21- inspired piece of work called Making Way for Water. Other people, who hadn’t lost all their common sense, would call it Flooding – in fact, flooding by stealth.

Making Way for Water based its business case on a need to react to “global warming” and “rising sea levels” by turning vast areas of land into what it called Washland. As Christopher Booker said in the Telegraph last week:

“When future generations look back on the global-warming scare of the past 30 years, nothing will shock them more than the extent to which the official temperature records – on which the entire panic ultimately rested – were systematically “adjusted” to show the Earth as having warmed much more than the actual data justified….

“…This really does begin to look like one of the greatest scientific scandals of all time.”

The deception failed in the case of the Levels, because once the whole nation woke up to the EU-impetus for the deliberate neglect of the maintenance of the waterways, there was such an uprising of concern and empathy that the dredgers were hastily brought back and the Levels were saved.

In an interesting twist, all the political action has now turned from negative to positive. What was once a covert plan to let the Levels go back to the seas, as a reaction to global warming induced sea level rises and extreme weather, has been turned on its head. Now local efforts are geared towards protecting the land in the face of such a threat!

Now the cat’s out of the bag, government -whether local or national – has no excuse not to act against their own Chicken Little bogeyman. If it’s determined to keep up this fiction about global warming, the Environment Agency has had no option but to turn into the good guys… 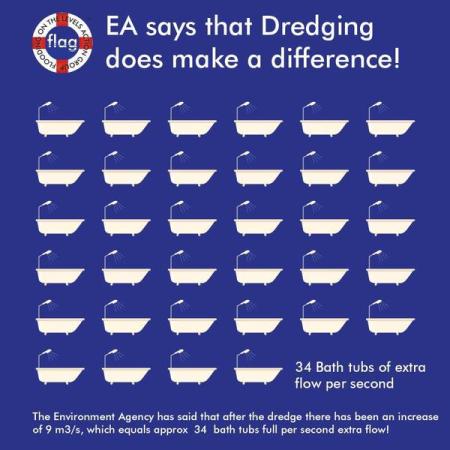 The EU has just announced that it will be blowing 20 per cent of its “budget” from its unaudited funny money accounts on preparing for the impact of “climate change” this year. Let’s hope some of these illegally-gotten gains find their way into the Levels, where much more dredging is still needed and where there remains some still who are waiting for their homes to be made habitable again.

Of course, those of us who watched Star Wars know that the Empire always strikes back. So hopefully, this has been a classic example to show us that their Death Star is quite fragile and vulnerable against the natural warmth, generosity of spirit and empathy of ordinary humans, and is therefore prone to implosion in on itself.

1 reply to The Deliberate Flooding of the Somerset Levels – one year on, how the worm was forced to turn