I’m sure that, like me, you’ll have noticed that during the televising of the so-called Arab Spring (Morocco, Egypt, Libya and now Syria), what looked like a natural uprising of the peoples was an illusion for the media, and that they were, in fact, being led from behind. In other words, these revolutions are made to look like a grass roots uprisings, but in reality they’re supported from behind by a hotpotch of corporate vested interests of NATO countries’ hardware and Al Qaeda local knowledge and intelligence.

I mention this as a way of explaining my growing realisation that I’ve been manipulated in the same way by whoever is behind the output coming from Drake-Wilcock-Fulford, and that I won’t be publicising any more of their articles from here on in.

They are trying to lead what they perceive as the “New Agers” from behind. However, I think they’ve miscalculated and misunderstood us because they don’t understand what underpins our thinking. Most of us are involved in deep spiritual practices from which we realised, long long ago, that we are sovereign unto ourselves. We don’t need a piece of paper from the Hague to tell ourselves that, and we also don’t need a change of government to experience it.

If there is to be a real natural revolution from the grass roots upwards (and few, if any, are), I think the spiritual teachers amongst us need to be able to continue to teach that re-empowerment of the individual from the inside out, to help people find their own sovereignty. Instead, what Drake and Wilcock are proposing are 24 hour, wall-to-wall DVDs on the mainstream media, replacing the existing wall-to-wall DVDs on the mainstream media. This is so-called ‘enlightenment’ from the outside-in…. just more brainwashing in other words … just another narrative to replace the old one which doesn’t work anymore.

I count myself as one of those spiritual teachers, as I teach shamanic journeying here, where I live. But I won’t be able to practice if there are riots, as we saw here last summer, by those who jump at the chance to take advantage of any perceived chink in the armour of the establishment. These people are not interested in the sovereignty of the individual. They are not interested in inner empowerment or self realisation. They are interested in getting the latest trainers.

Where most riots usually start with a political protest demonstration and end in looting, this one bypassed the political protest and went straight to the looting, and they burned down huge areas of their neighbourhoods in the process. It was mainly the small, local shopkeepers that suffered and many lost their shops altogether. The police lost control .. it was too big for anyone to get a grip on as it spread from city to city like wildfire through the use of mobile phones … and innocent people were trampled on, and some died.

We are being manipulated to do this revolution for them… and apart from the fact that I don’t like being manipulated, if I am to be manipulated, let it be by people who know what they’re doing. These guys plainly don’t know what they’re doing. Trying to herd those who come under the loose umbrella term of “New Age” is like trying to herd cats. We’re much more like cats than dogs. Where dogs have masters, cats have staff ~ so they say!. 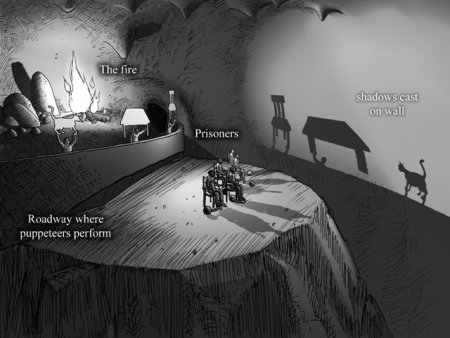 We’re all in Plato’s Cave here … tied up, in the dark, and facing a wall upon which the puppet masters are throwing different shadows.

All we can do is go with our gut instinct and follow that … not what others tell us to think, or try to bully or intimidate us into thinking, or threaten to excommunicate us from the club for thinking. Instead, we can only put our trust in our own body’s inbuilt intelligence and early warning system.

It took a while for me, at first, but now the bells, klaxons and sirens of my early warning system are going off big-time about this.

This isn’t the revolution I’ve been waiting for.

3 replies to Wake Me Up When The Revolution’s Over