Subtitle: How Egyptology was infiltrated and dominated by academics and foundations to manipulate consent for the New World Order

I sometimes feel that I’m thoroughly manipulated by the way that the news is fed to us.  The trouble with last week’s story about  ‘recently discovered’ Egyptian rock art thought to be the same age as those of the Lascaux caves was that it was found 50 years ago, but not a word  leaked out. Could it be that now that Zahi Hawass has gone,  we’re finally being allowed to see this?

I am going to put a Rabbit-Hole Warning on this post. If you’re averse to covert conspiracies, you’ll probably prefer to bail out now.

Anyway, for those still with me … let’s look first at this so-called “Lascaux on the Nile”  story.

Although they’d been known about for more than 50 years, a story about the rock art etchings at Qurta, on the northern edge of Kom Ombo, was first published in the little-known Al-Ahram Weekly in 2007, and then sank without trace. The (Belgian) archaeologists. led by Dirk Huyge, who ‘found it’ announced then.

“We propose an attribution of this Qurta rock art to the Late Pleistocene Ballanan-Silsilian culture or a Late Palaeolithic culture of similar nature and age.”

Dirk Huyge added: “In this respect, it can hardly be coincidental that the comparable site of Abu Tanqura Bahari 11 at Al-Hosh is also situated at close distance [only at about 500m] from a Late Palaeolithic site that, mainly on the basis of its stratigraphical position immediately below the ‘Wild Nile’ silts, must be of roughly similar age as the Ballanan-Silsilian industry of the Kom Ombo plain. These remains, therefore, suggest that the rock art of Qurta can be about 15,000 years old.” 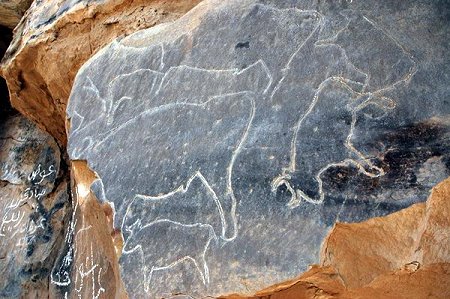 Huyge then went on to say that the exact age of the rock art was unfortunately not yet available, “but we propose to sample the rock art in the near future for AMS 14C dating of organics in the varnish rind and/or U-series dating.”

In the near future? Five years? That’s how long it took.

I think we can expect to see more little nuggets that “rewrite the history books” now that the Edgar Cayce sponsored leather-hatted stooge has vacated the throne of Minister of State for Antiquities Affairs, which he ran like his own private fiefdom.

That the man was corrupt, there can be no doubt, and he is currently having to answer allegations about antiquities that went missing during his tenure. Added to which, archaeologists in Egypt would continually report on how Hawass ‘sat on’ their finds, or how he would banish foreign archaeos from the country, once their work was done, and then claim the find for himself. It’s not just hearsay. I personally know archaeologists that this happened to.

Other archaeologists were ‘bought out’ in classic honeytrap sting operations. It took many years for a respected Egyptologist to extricate himself out from under the fragrant charms of one such lady and not before she managed to drag him off to the (much older than Giza)  Bosnian pyramids to get him to pronounce them ‘natural geological structures’. What possibly he and she failed to realise is that our earliest ancestors revered Nature and would enhance ‘natural geological structures’ into temples by building tunnels in them, and creating other artifacts, like engineered water channels and ceramic ionisers.

The couple finally split in 2007 after a trip to Egypt together. Perhaps that’s where the scales fell from his eyes and he saw the hieroglyphics on the wall (Sorry! Couldn’t resist.)  But she has taken over his website, where he  has no control, and upon which the lady is question is still shrieking at Semir Osmanagic in upper case letters about the Bosnian Pyramids ‘hoax’, even though she has no science credentials whatsoever.

Again… this isn’t just hearsay. I have had personal (and painful) experience of this lady and her son who, back in the early 2000s,  rigged up a bogus archaeology forum with fake puppet characters solely with the intention of decanting the brains of an expert in Sumerian mythology and epigraphy, and broadcasting great swathes of the copious The Urantia Book   ….but more about the whys and wherefores on this later.

As more and more much older antiquities emerge from under the huge seating area vacated by Mr Hawass, a new narrative about the history of man will become clear ~ one of a more intelligent being because of his relationship to the all-knowing spirits.

So what was Mr Hawass’s agenda in hiding so much from us? Was it purely about money? I’m told that he would deliberately funnel stories to specific chosen magazines who would pay him for them with hard currency. But that’s not an unusual practice, and there were some perfectly good finds that never made the press at all ~ a good example being “Lascaux on the Nile”.

Perhaps the answer can be partly found by examining Hawass’s sponsors,  the Association for Research and Enlightenment (ARE), which bases its ‘works’  on the prophecies of Edgar Cayce.  Edgar Cayce, if you remember, was one of the first ‘channellers’ ~ although they weren’t called that back in 1931 when the self-professed ‘sleeping prophet” and psychic founded the ARE. But it was the ARE that funded Mr Hawass to go through university and get his archaeology degree in the first place.

And so how does the ARE fit into the conspiracy?  In my considered opinion, it’s to do with using Cayce’s prophecies to create new back stories through channelled information, something which is a favoured modus-operandi of current psy-ops propaganda and disinformation merchants.

At a time when the story of Jesus was taken literally, one of Cayce’s prophecies had much to say about his life, including, as it says on the ARE website…

“….covering the “lost” years that were never addressed in the Bible. But Cayce also spoke of Jesus’ return and here is an excerpt on that subject:

“What is meant by “the day of the Lord is near at hand”?  That as has been promised through the prophets and the sages of old, the time – and half time – has been and is being fulfilled in this day and generation, and that soon there will again appear in the earth that one through whom many will be called to meet those that are preparing the way for His day in the earth. The Lord, then, will come, ‘even as ye have seen him go.’” Edgar Cayce reading (262-49) July 9, 1933

And so, if you’re still with me,  this leads me to my conclusion … but first of all, I will need to explain about one more character in this surreal tragi-comedy. His name is Supriem David Rockefeller and he has been groomed to be the next Saviour of the World.

As explained in the Imminent Invasion of the Ancient Sumerian Gods, a new narrative about our past is being prepared for us now that the old Christianity one has failed. However, this story will need to trade on our deeply-rooted psychological propensity (groomed into our DNA for more than 2,000 years) to expect a Second Coming of a Saviour. Noting the growing disillusionment with the Jesus Wants Me For A Sunbeam story, the powers-that-be have been reaching further back to the times of the Sumerians and the ancient Egyptians (hence the decanting of the Sumerian expert’s brains on the aforementioned archaeology forum).

And so from creating a literal reading of the Sumerian Enuma Elish and the ancient Egyptian texts, and then chucking in a bit of the totally fake Book of Urantia (which they probably wrote), they’ve come up with this character who’s supposed to be a reincarnation of Marduk-Ra crossed with Lucifer in the form of Supriem David Rockefeller. But this is Marduk-Lucifer Mark II, a more repentant version who wants to put right the troubles of the Earth which were caused by the sin of his own iniquities. However, in order to put right the world, he would need to be put completely in charge of it by forming a One World Government ….  do you see where I’m going with this now?

If you haven’t heard of the Book of Urantia, nobody knows who wrote it and at 2,097 pages long, very few are going to be able to thoroughly study it. As I mentioned earlier, great chunks of this book would appear on the aforementioned forum, for no apparent reason, or none that I could fathom at the time, until I realised that a new back story was being prepared about a Lucifer character who was also a reincarnation of the Marduk-Ra, and who would be presented to us in the form of Supriem David Rockefeller. (For more, read The Myth Around Supriem David Rockefeller by Wes Penre)

I know. I know. It’s nuts. But the people who think they have a divine right to rule us ARE nuts, and this is who they were going to try to foist us on us as our Saviour.  You really couldn’t make this stuff up….and yet they have, along with the Book of Urantia.

However, despite being backed by the various covert factions in the Pentagon, the CIA and the United States Air Force (who act as Supriem’s personal security detail) the announcement of this Second Coming of yet another Rockefeller to rule over us all was destined for 2009, so they’re either running late… or it’s failed. Possibly the Rage Against the Machine in Cairo, which had the side-effect of unseating Hawass, has put paid to their plans… who knows?

Well, I think that’s enough for now. For those that are wondering about my sanity, yes  …it is still in one piece after having to go down more rabbit holes than Alice in researching who and what are really behind chemtrails. But I am thinking of renaming this blog A Bag Lady Shouts At The Traffic. Next time you see one of these poor dears, do listen to her because  they often make a lot of sense, and it’s just us that have been trained to think in such a way so that her words seem like nonsense.

9 replies to The Second Coming Has Been Delayed, Due To Technical Difficulties