The oldest rock art ever found in the British Isles was discovered last summer in a deep underground cave in Wales, somewhere on the Gower Peninsula. It shows the faint scratching of a reindeer with a spear in its neck, and it’s dated to around 14,000 years ago, during the last Ice Age. (It’s not the cave in the picture above, by the way; that is known as the Hall of the Bulls from the Lascaux caves in France, where the paintings are even older, dating to around 20,000 years ago. )

Experts are also studying other marks etched into the rock below the speared reindeer.

“This drawing was done with the right hand by somebody using a piece of flint who has drawn a classic reindeer design,” said Dr George Nash, an associate professor at the University of Tomar in Portugal, who stumbled upon the prehistoric find.

“It is very, very exciting.”

But although this Welsh etching is extremely old, it is not the oldest on Earth. The earliest attested cave art comes from the Blombos cave in southern Africa and at 74,000 years old, it consists of geometric designs.

Just this one find alone, in southern Africa, instantly smashed the paradigm about Stone Age cave men being ignorant savages. In fact, the term ‘cave men’ is barely used anymore by people in the know ~ not least because our earliest ancestors rarely lived inside caves which they regarded as sacred spaces and for use only for ritual activity. But also because, to those who examine their ritual artifacts with a seer’s eyes, it’s obvious that these ancestors were living in a far richer and complex world than we can even conceive of today.

The importance of ritual activity, where the sacred is invoked and evoked, has become almost lost to us today, although shamanic healers are bringing back some of it. It’s interesting to also see the importance these Palaeolithic ancients placed in expressing themselves in pictures. A few very early runes – the earliest form of writing – have been found in Russia dating to about 10,000 years ago. But before that, there are only images – images either scratched or etched or painted with hematite on cave walls and rocks, and they are mainly discovered and reported on by people that call themselves rock art scientists.

However, I’ve often wondered whether it has been a mistake to try to develop a scientific epistemology for interpreting ancient rock art. For instance, do we need to develop a scientific epistemology to fall in love? Or to know that fire is hot? Of course not. These are subjective, inner experiences ~ just like the experiences of those who daubed on cave walls. And that is why I believe that their meaning and purpose is not so accessible to those who wish to subject them to outer, objective experimentation.

The world of archaeology and anthropology is slowly coming round to this same realisation.

The right brain and left brain are separated by a thick wadge of neural fibres called the corpus callosum. 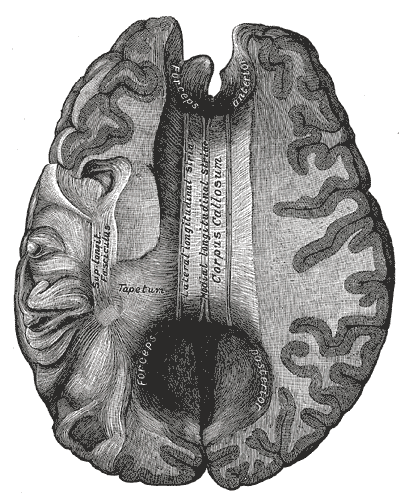 And so when rock art scientist David Lewis Williams published his seminal book, The Mind In the Cave: Consciousness and the Origins of Art in 2002, it marked the first time that a rock art scientist crossed the metaphorical corpus callosum to make the case that, at the time, these paintings were the stained glass windows into other worlds of the soul which were reached within those dark, cold and cavernous Ice Age cathedrals.

The closest we come today to that cognitive experience is in the shamanic journey into trance. Therefore, in viewing these paintings through the objective lens of science — cognitive epistemology, palaeoart studies, general and replicative archaeology, soil science, speleology, semiotics and geomorphology, to name but a few — we’re surely using the wrong tools for the job? You’ll find a lot of rock art scientists who will fight to the death anyone who suggests that there is another way, and they are highly critical of David Lewis- Williams …mainly because he did find another way.

He discovered that the shaman uses different tools — for instance, clairaudience, clairvoyance, clairsentience. These are cognitive tools which he has developed over many years of training. This means that while the scientist is crawling all over The Birdman of Lascaux armed with only a microscope and a BA. Hons in Art History, the shaman is silently and empathically communing with The Birdman himself.

This is not a New Age, touchy-feely idea. It’s an extremely Old Age tried and trusted technique. So possibly, we’d be better off by just asking shamans about what these paintings mean, which is what David Lewis-Williams did.

Lewis Williams is now retired as director of the Rock Art Research Institute at the University of the Witwatersrand in South Africa. But back in the Seventies, he gained his Ph.D through his epigraphic work with the San Bushmen, one of the few remaining indigenous tribes which has a tradition of shamanic practises going back for thousands of years.

He focussed upon the various San ritual ceremonies — especially one known as the Healing or Trance Dance — and their connections to the San rock art. He later published his findings in the highly acclaimed: Believing and Seeing: Symbolic Meaning in Southern San Rock Paintings.

Cave art of the San Bushmen

The San Bushmen live in the part of the Africa where the Blombos cave art was found, and may very well be the descendants of the man who, 74,000 years ago, etched that hatched geometric design on the piece of hematite at the top of this article.

In The Mind in the Cave, Lewis-Williams builds on his work with the San Bushmen and goes further to show that the patterns of images leading from the cave entrances in Lascaux and Chauvet in France to the dark, almost inaccessible recesses, provide an almost mirror image of the shamanic journey. 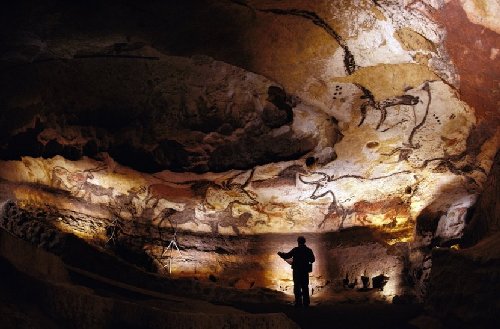 “….the entry into Upper Palaeolithic caves was probably seen as virtually indistinguishable from entry into the mental vortex that leads to the experiences and hallucinations of deep trance…. The embellishing images blazed (possibly in a fairly literal sense) a path into the unknown.”

This path into the unknown reminds us of the one taken out of Plato’s Cave in The Republic.

Interestingly, he quotes Socrates comment, which reminds me of our own awards processes.

“… if the benighted prisoners [of Plato’s Cave] had a system of honours and commendations, and awarded prizes to the man who had the keenest eye for the passing shadows and the best memory of them, they would not wish to abandon their awards merely on the word of one who had been up to the light.”

He adds that nor would the one who saw the light wish to return to share the esteem of those who had won the awards. 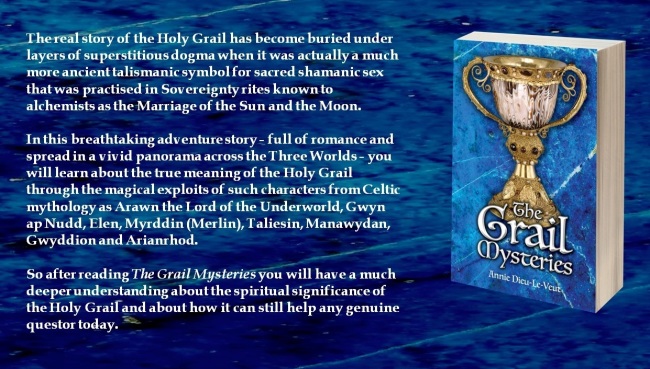